I usually avoid malls at all costs. Yes, I know it’s hard to believe, but I don’t like to shop. I don’t like crowds, I don’t like looking for clothes on the rack, and I don’t like spending money. As much as I dislike them, every once in awhile, it’s inevitable and with two toddlers it has to be a planned event. After packing snacks, diaper bags and the stroller and a bag full of patience, we load up the truck and make the two-mile trek to the local mall.

Back to school sales filled the parking lots like someone was giving away money. Obviously the use of school uniforms has not cut down on the traffic or the amount of money parents are spending in preparation for the new school year. We quickly give up on the notion of finding a space near the door and my husband decides to drop kids and me off, park and join us.

While waiting for him to park, we run into several people we know and entertain ourselves with small talk about the weather, the children and general life updates. When he joins the discussion, and us our daughter becomes inpatient and starts to pull my arm towards the door. Just then, a young Caucasian woman exits Belk followed by an African American male around the same age. It’s obvious they are together, but no public displays of affection or anything. As they walk to their car, minding their own business, my daughter says, “Hey, they are not the same color.” She obviously sees the dismay on my face and quickly adds, “but it’s okay, it doesn’t matter, right?”

“No Morgan, it doesn’t matter, God made us all, so a person’s skin color is irrelevant,” I explain. Now, I’m not sure if this couple heard my daughter, but I do know her comment bothered me for several reasons. First, I have several interracial couples in my family and lots of mulatto cousins. Second, in an effort to protect her self-esteem we have intentionally instilled positive ethnic undertones. Third, she is surrounded by people of all ethnic backgrounds in a variety of settings and some of her friends are beautiful products of interracial couples.

As an adult, I have had the privilege of avoiding certain uncomfortable conversations such as race, religion and politics, and now find myself confronted with these conversations on almost a daily basis with a curious toddler. So obviously she is stuck in a diverse world and trying hard to put all the pieces together and I have the ever so important role of helping her figure it all out. But this puzzle has quirky pieces and one wrong turn or term can lead to ethnocentrism or self-loathing; neither is my intent. But the middle ground to all things is generally rooted with acceptance. I am certain I have in no way implied, said or felt concern with interracial relationships, but something she has been exposed to has either been misinterpreted or given the impression that interracial couples is unacceptable. I can only pray that I am able to dig up the seed that has been planted before it takes root and I must reexamine any internal bias or prejudice I may subconsciously harbor. Parenthood is an awesome responsibility and opportunity for self-examination. 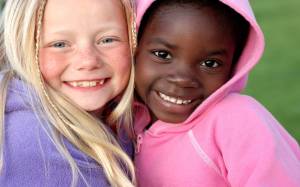